An Inaugural Celebration to Remember

Whether you are an Obama supporter or not, you have to admit the Inauguration itself, is a pretty awesome event.  One that none of our family has experienced, until recently.

My step daughter and son-in-law have now broken through on this arena. Rob and Tara Hach are the owners of Anemometry Specialist, a wind data collection company in Alta, Iowa.  In 2010 they were Iowa’s Small Business Person of the Year!

While we knew the possibilities were out there for them to be invited to the Inauguration, until it became a reality we didn’t clearly understand the honor they received and the privilege they enjoyed. 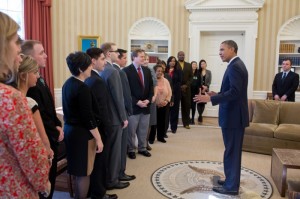 This is at the White House in the Oval Office.  Too Cool!!! Rob is the gentleman about

in the middle of the pack with the red tie.  Tara is on his left but very hard to see.

This was on Friday before the Inauguration.

Admission ticket to the Inauguration.

They saw Katy Perry and other celebs! 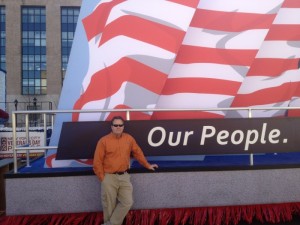 The float on which the 8 Citizen Co-chairs would ride for the parade. They were the 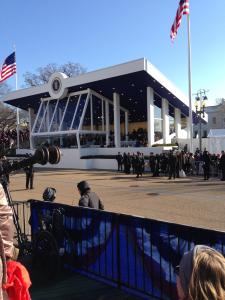 Tara watched the parade from this area. Right across the street from the President’s

seating area.  It was cold and a long wait to see her husband Rob on the float! 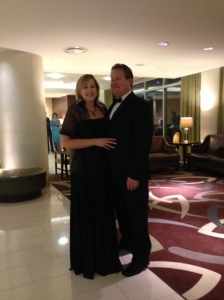 Ready for the ball! 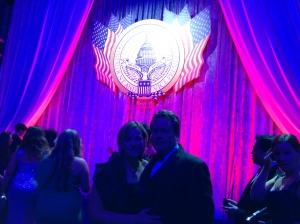 A night to remember, up on stage at the Inaugural Ball!

Hey kids, we are so happy for the opportunity you were given.  We lived vicariously

through you as we watched the entire process on Monday 1/21/13. You were able to

experience history in the making!

Korean War Memorial–Freedom is not Free!

How important it is to recognize our heroes and she-roes!

And I’m proud to be an American

Where at least I know I’m free

And I won’t forget the men who died,

Who gave that right to me.

These pictures were taken several years ago when we were in DC.  I cannot tell you what emotions, seeing the memorials in person, brought forth!  We owe these brave ones a debt of gratitude we can never repay!!!